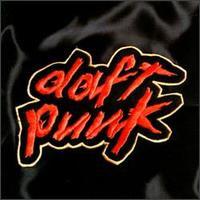 Anyone who knows me knows that I am a self-professed NERD when it comes to my favourite musical group:  DAFT PUNK.  IMHO, they are it.  What members Thomas Bangalter and Guy-Manuel de Homem-Christo have done, and are continuing to do for not just the house and electronic genres but for media in general, is nothing short of astonishing.  Over the course of their careers, these two unassuming guys from Paris, France have hidden their faces with masks, became robots because their sampler blew up, and finally re-introduced themselves and their music in one of the most entertaining live tours in the past decade.  Their videos are some of the most ground-breaking and entertaining pieces ever aired.  They broke into the movie business, starting first with their own full-length film DAFT PUNK’S ELECTROMA, followed by composing the musical score for 2010’s Tron: Legacy, which was then recorded by an 85-piece symphony orchestra.

All the while, the pair have kept their faces hidden from the world of celebrity and stardom, yet through their music, visuals and the meticulous detail put into every project the duo are involved with, they have created an image not solely based on what the group’s members looked like, but rather on letting their music, videos and live performances alone form the basis of that image.

Homework, the first full-length album from Daft Punk, was the result of great music, slick marketing, a radically different approach to how the group appeared in  photos and interviews, and the fact that the record gave “dance music” the healthy kick in the butt it sorely needed at the time.  “Da Funk” was already a huge underground and commercial hit, with its video receiving heavy rotation on MTV and other shows around the globe.  The B-side of the U.K. 12″, “Rollin’ & Scratchin'” was being hammered at European raves to the point of being overplayed.  The duo had already earned the respect of the industry and their releases through Scottish label Soma Records had been met with great acclaim.  A bidding war to sign them began, with Virgin winning out only because they agreed to the duo’s strict demands:  Daft Punk would hold exclusive rights to all master recordings, licensing the tracks on a deal-by-deal basis to Virgin, and no photographs of the group where their faces were exposed.  Initially put in the contract due the band’s shyness, it ultimately created a mystique about the group and added to the mounting buzz about seeing a full-length LP release from the French duo.

Although Homework is a concept record and also clearly an homage to Chicago acid-house, disco, breakbeat, funk and techno genres, the balance of the tracks, going from blistering, squealing synths to a laid-back, chill-out vibe, make for a listening experience that was at least 10 years ahead of its time and can still hold its own against today’s new-wave of electronic production styles.  To me, they simply got house music right with their debut effort and this is truly an album that inspired a million beginning house producers to get down to it and made house veterans to step up their game in terms of quality and consistently.

I fully expect people to criticize and disagree with my choice of greatest electronic album ever made, and that’s fine.  I’m simply offering my opinion on what I consider the best electronic album I’ve ever heard.  The album will be reviewed over four posts, one for each side of the 2×12″ release (my most revered record in my collection).  So let’s take a track-by track look at a record that came out in 1996 and still sounds as fresh and relevant as ever 16 years later:

1.  Daftendirekt – “What the hell am I hearing?” is a question that I asked myself shortly after popping the CD into my player.  A very bass-heavy, filtered voice repeating “Da funk back to da punk, come on.”  In came the breakbeats giving the listener a preview of the recognizable drums used in “Da Funk”.  The beats are nice, fat and juicy and this serves as a very concise teaser of what’s to follow throughout the rest of the album.  It’s a great intro, just enough of everything before transitioning directly into…..

2.  WDPK 83.7 – A the time of the album’s release, it was not only “Da Funk” that was getting hammered, but the B-side of the U.S. 12″ single “Musique” got quite a bit of club play as well.  Taking a slightly pitched down sample of the vocal, this quick clip lets us know that this disc is ready for take off.  As if you needed a bigger clue that we’re ready to go, Thomas proudly announces with some heavy distortion, “WDPK 83.7, the sound of tomorrow, the music of today, brings to you exclusively Daft Punk’s Homework!!!”

I often wonder if the boys had any inclination about how prophetic that statement was.

3.  Revolution 909 – Hope you weren’t expecting some electronic ode to the Beatles here.  This track is not only a big “F*** you” to the French authorities who were cracking down on illegal raves throughout the country at the time, but also to any jerk who starts doing that incredibly annoying “Boom-chick, boom-chick, boom-chick…..” imitation of a “typical” house beat when you mention you like house music.  The intro replicates what you might hear if you were in a cop car about to bust an underground party.  The crowd scatters when told “Stop the music and go home.  I repeat, stop the music and go home!”

Let the revolution begin.  Some of the toughest and tightest beats ever coaxed out of a Roland-909 drum machine anchor this tune right to the floor and with an incessant groove that showcases what Daft Punk do best:  they get behind the machines and make tunes that drive the party.  The drums take the forefront here, hence the title and the layers of the groove come in and out throughout the track creating nice breakdowns and in-your-face sequences to keep things interesting.  Still great to play out to this day.

4.  Da Funk – If you were around in the late 90s, you definitely have heard this one.  But what exactly was it?  Hip-hop?  Funk?  Rock?  Techno?  This tune, considered Daft Punk’s breakthrough release, incorporates all of those styles and delivers them in a booming, funky, squelching, vocal-less masterpiece that appealed to rockers, hip-hoppers, house-heads and more.

Not only was this a hugely popular track in the clubs, but the video featured above added a whole new level of interest to not just the tune, but Daft Punk as a whole.  Conceived by acclaimed director Spike Jonze and the duo, the video functions as a mini-movie involving a human/dog named Charles who bumps into an old neighbour/past crush while walking through the streets with his leg in a cast and carrying a boombox playing “Da Funk” at high volume.  Huh?

It may not make sense on paper, but it certainly got people talking about Daft Punk, whom many were convinced was just one guy who wears a dog mask.  It was a unique approach to a debut video, but the impact spoke for itself.  “Da Funk” would go on to sell more copies than Homework itself and was the major reason that “Musique” was not included on the album, as Daft Punk reasoned that through the sales of the single, most fans already had the track anyway.  I still pull this one out all the time and this was the only track in the Alive 2007 set list that was given a standalone segment (albeit with Daftendirekt layered over top).  Even with dubstep focusing on similar tempos and sounds these days, I’ve never heard a tune that sounds quite like this.  If a band is going to introduce themselves to the world, this is one hell of a way to do it.  Check out the video if you’ve never seen it before or simply want to revisit a classic; you won’t be sorry.

5.  Phoenix – This was the track that convinced me to finally pick this album up.  I was music hunting in downtown Toronto when I heard this one and immediately asked the clerk who it was.  “Daft Punk”, she responded.  I rang up my purchase about 30 seconds later.

At that point I was already playing out “Around the World” and “Da Funk” and I was amazed to discover Daft Punk had a sound like this.  It opens with progressive layers of 909 drums, hi-hats and percussion and the introduction of a very gospel sounding vocal sample.  Throw in a very cool rolling bassline and you end up with a very slick, four-to-the-floor house track which has been a staple of my deeper house sets for years.  The arrangement makes mixing in and out very easy and demonstrates that you can pick almost any track from this album and drop it almost anywhere.  One word of advice:  avoid the Basement Jaxx remix found on “Daft Club” like the plague; it simply does not do the original any justice.

Well, that’s Side A done.  Stay tuned as we continue our track-by-track review with Part 2 coming to you very soon!  Be sure to check out the rest of the posts on thekeytothehouse, and let us know what you think!